When you go to a fair to race, you’re really reminded of what harness racing is all about.

The old men in easy chairs chatting as you enter. A grandmother in a wheelchair greeted with such deference and respect by everyone.

…Regular drivers, many who are silent competitors on the bigger tracks, become once again old friends, with much teasing, handshakes and laughter.

Little tykes, scooting quickly about as horses go in and out to race. Kittens sparring by the stalls.

No one young or old minded the torrential rains that poured down, the esteemed judges urging “safety first”, then…as the rain grew ever harder, dispensing with the starting car altogether, and declaring a “gentleman’s start”!

Nervous young drivers, getting valuable experience and tutelage from older mentors, leaning closer to whisper to them, before each race.

I drank it all in… as I sat with Rocky, and savored it.

It was something we thought we would always have, but now realizing how it may be fleeting, and come to an end one day. The Horse Himself was their center without question, each one taken care of, as a prized companion.

As we ate bbq and brats in the gritty mud, we felt like royalty. This is how harness racing started, and how at least this part of harness racing was meant to be. Lord, please keep the fair racing around!!

**this was originally posted on Facebook, permission granted for photos.

Read all about the history of the Pocomoke fair here

Jubilee Tina was not a great Racehorse by any means. Tina was sired by Tuxedo Hanover, when everyone hoped he would make a successful sire. The game Curly Smart champion Protégé unfortunately would not distinguish himself in the breeding ranks.

Tina had a 2:09 record at the age of ten, finishing last in $2500 claimers.
One thing about Tina, she was a “free-legged” pacer.
-There were getting to be fewer and fewer free-legged pacers around, and Jubilee Tina was one of them.

Most horsemen know the term free-legged describes a pacer who wears no hobbles.

There just happens to be a few pacers who are so steady that hobbles weren’t necessary. Some would actually perform better without them. Frequently, this tendency ran in families. Steady Star often begat “Free-leggers”.
For those new to the sport, here’s a nice article from Scarborough Raceway http://www.scarboroughdowns.com/HarnessRacingHistory.php

The Lisi Stables were fortunate enough to have a few free legged racehorses. Starry Night, and one colt Tommy Cugle and I broke ourselves, Passing Zone, … and Tina.

The Lisi Family Stables leased Tina from Paul Ruffino, who had to go into the hospital for a hernia operation. Paul was a holdover from the old days of racing…representing those who trained at the long defunct Pillsbury Driving club, near Elkridge Maryland. The track was active before pari mutuel racing was legal in Maryland. Billy Hubbard was running around in knickers at Pillsbury. George Warthen and many others enjoyed harness racing there as a hobby, caring for their horses, learning about harness racing from the older trainers, and participating in amateur racing. The Pillsbury Drivers sparred against other driving clubs, such as the ones in Parole, Brightwood or Oxon Hill on Sundays, trading locations with them, and sharing potluck meals spread out by the womenfolk.

Paul, like a lot of the old timers, competed because of his love of the sport. He sure wasn’t winning anything. Over 80 years old, He drove his own, still using a conventional sulky. Tina was a tallish plain looking bay mare. She was lazy, not particularly friendly, with a matter of fact, “don’t care” attitude.
…“Sure Paul I’ll take her for you, you can have her back end of the summer”

…Picture a boy.
A boy sitting in his mother’s lap, who’s feet can’t reach the stirrups yet, but braces them against the crossbar.

The boy had been sitting on her lap a lot since the springtime at Rosecroft Raceway, starting with a trotter named Carrie Dill. He’d have his hands in the hand holds, she above them on the lines ahead, on the metal buckle where the lines attached to the hand holds, actually holding the horse. Each time they jogged, she was holding the trotter less and less…until she was not really putting any pressure on the lines at all, but only there in case the son’s grip slipped. Sometimes telling him “wow you’re holding her completely now” or some such encouragement. She could tell he had a nice touch for driving.

Next was Freestate Raceway. Frank DeFrancis had revived the old Laurel Raceway (not to be confused with the Thoroughbred track Laurel Racecourse still existing today as Laurel Park) in a big way, with big time advertising, special events, and revamped barns. Meanwhile Rosecroft’s owner Mark Vogel was converting that half mile oval into a five-eighths, so all the Rosecroft folks moved their stables up to Freestate during the summer time construction.

…Picture the boy.
In the the summer sun, just getting over the trees at Freestate Raceway’s back jogging track.
Getting a little lanky fast. Now he’s sitting on the seat in front of his mom, who’s hanging off the edge of the seat. Jubilee Tina swinging along on the pace.

“You got her Art”

…She slips off the back of the seat, running so as not to fall when she hits the soft sand of Freestate’s back track.

She watches him jog away, the image forever, like a slo-mo video, engraved permanently in her mind…in her heart.

His training wheels were off.

————————————-
Two Afterthoughts:
1: Jubilee Tina won for the Lisi’s, a trophy race for the Wigginton Birthday pace in 203.2 lowering her record at the age of 10 years. Paul was able to get around after his surgery and was in the winners circle, his eyes quite wide as he was given a beautiful silver trophy.
Arthur Lisi Sr also cashed a nice across the board ticket on Tina, as she went off at 77 To one.

2: Arthur Lisi Jr after driving a few schooling races, made the decision to become a blacksmith and attended Oklahoma Shoeing School. He has developed ground breaking Horseshoeing techniques and is a top blacksmith of all breeds.

3: Nowadays with many backstretches having discontinued stable areas, trending to Ship in racing, there’s an option for young people to learn about participating in harness racing through the Harness Horse Youth Foundation. (HHYF) Check it out! 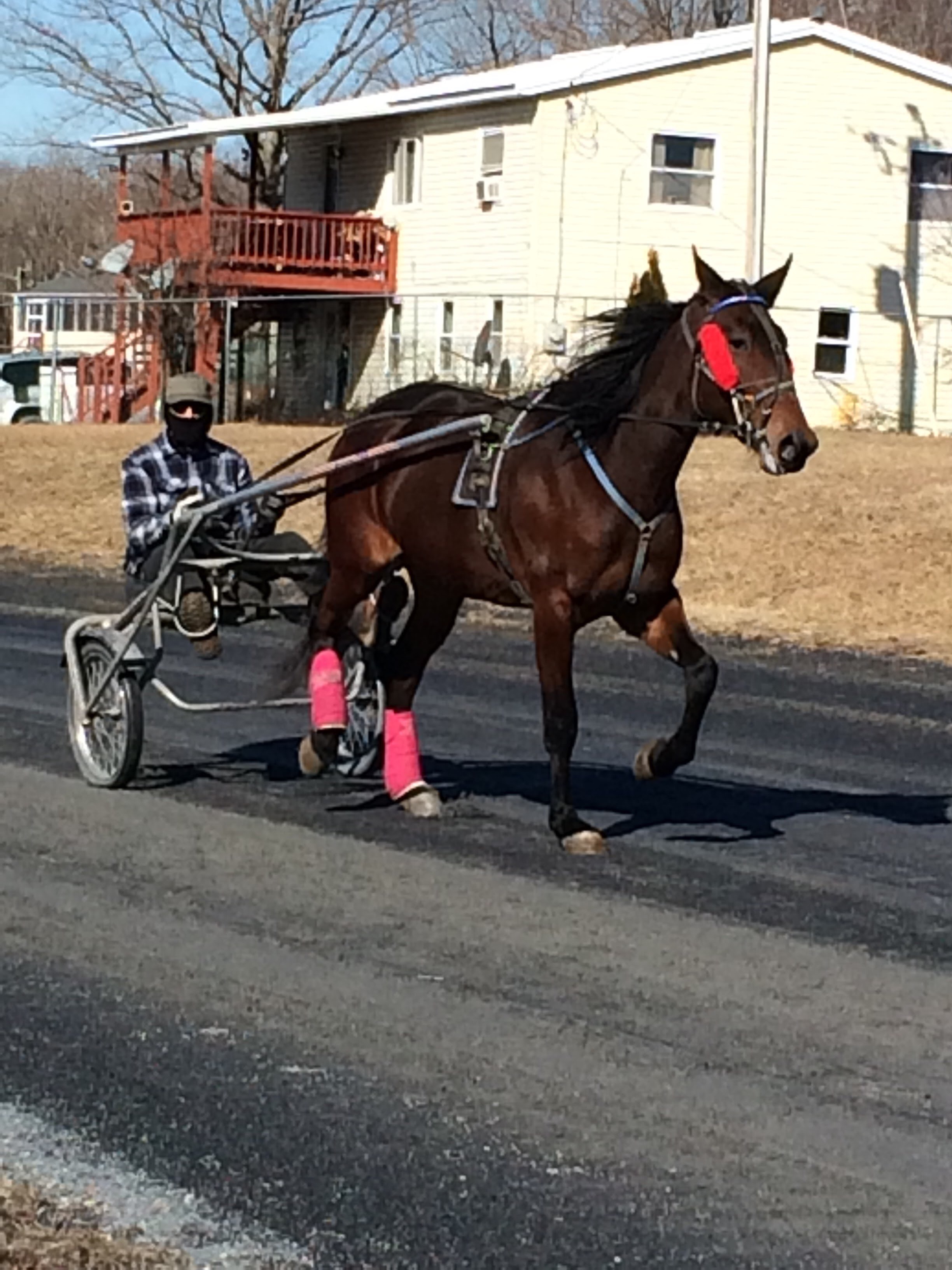