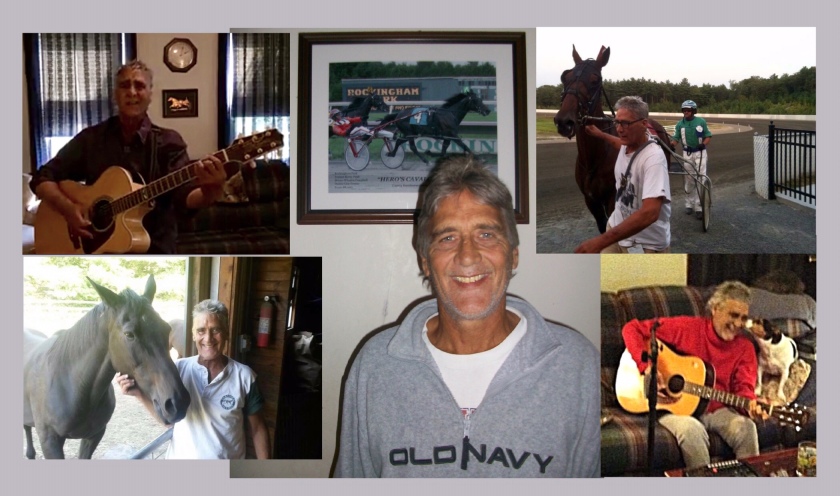 Update; Mike is recovering! Go to the bottom of the post for the update!

I first met Kerry Michael Pratt by reading his name in the Rockingham racing program. I may have seen Mike checking up the horse as they walked out of the Paddock for the post parade, but to tell you the truth, I was watching the race on a tv monitor, and probably didn’t even see that. I was only interested in his HORSE -as a business opportunity.

In the early 2000’s for four years or so, Rockingham Park, generally a Thoroughbred track in New Hampshire, hosted a three-month summer harness meet. A lot of us from Rosecroft packed up and went, including the Lisi stables, which by then was pared down to ten horses. What a great time. The Maryland, Delaware, Pennsylvania, Jersey and New York horsemen made many lifelong friends with the New Englanders.

While I was stabled there in 2003, an owner of mine decided that he wanted to claim a horse.

My client preferred trotters, but would consider a pacer. He wanted to spend ten or twelve thousand bucks, and I agreed. We both felt it was a perfect time and place to claim one for racing in the autumn at Colonial Downs, and if the horse stepped up, we could go in the winter to race for big money at The Meadowlands…We had come up with several choices.

“Ma there’s only one horse here to claim, a four year old pacer. He can’t leave a lick, but he’s been flying home. – a late bloomer”

~By this time, my son had worked as a Paddock blacksmith under Larry Ward at Rosecroft Raceway coming out of Oklahoma Shoeing School. He had done his share of gambling while on the job, and really knew how to watch a horse race. He knew how a race would shake out, and saw things that many people didn’t. Because of this, I put a lot of stock in his opinion.

The blocky medium sized black gelding got away last, but came home in 26 and a piece to finish in the money, but did not win. We figured he’d go right back in that class. It was the first time he’d ever been in a claimer.

Next week he was in for $15,000… My owner almost decided to do it…he was on the fence. That very week, he bought an unraced seven year old Pine Chip stallion from the Amish cheap, and shipped him to us. He and I preferred trotters anyway. My son threw up his hands in frustration as I turned my attention to our new charge. He had a hitch from a suspensory, continually irritated by the callous of an old broken splint bone. Not a bad horse.

Of course, Hero’s Cavalcade won for 15, and was removed from the claiming ranks. He was learning to leave, and wasn’t losing anything coming home. It was a killer combination which made him very hard to beat. He kept winning his way up to the top classes by the time the Rockingham meet was over. Basically, Junior and I tried not to notice.

We went directly from “The Rock” to stable for the fall Colonial Downs harness meet in New Kent, Va. At that point Colonial was very welcoming to out-of-state Horsemen, and we all urged our new friends in New England to come and race. We could stay in the dorms there, and there were many late closers, and good purses, not far from Richmond.

Arthur Jr. was shoeing on the side, and got to know Mike Pratt. “Ma I’m so glad we didn’t claim that horse. It’s his only horse, and he really loves him.” I started to notice the two of them, jogging on the track, taking long walks together, grazing him by the hour in between the barns. I struck up a conversation with him, not mentioning our desire to claim his horse this past summer.

We didn’t talk about horses.

We talked about music. He had seen me playing guitar at my Rockingham barn with Angus, another bluegrasser horseman, and Mike and I started talking… chatting about guitars, songs we liked, favorite recording artists. Angus had sold me a cheap Alvarez which I had with me at Colonial.

Musicians have a unique bond, very similar to the one that fellow horsemen have. It is different than merely having a “common interest“. It is the sharing of a passion, or even an obsession as some might call it. It is it’s own world, and the people who are inside it know how the others feel, think, and express themselves.

“Hey Nancy, they’re having a fish fry at the back dorms tonight, I don’t have my guitar with me, why don’t you bring yours and play?”

At some point he had played the club circuit. Like me though, once he got bitten by the Harness bug he did not look back, except to play very occasionally for himself. He knew a boatload of classic rock and pop songs that he had adapted to his solo acoustic style. He was also a songwriter, which I didn’t find out until later.

At sunset, the fish fry was rolling. Some of the guys had been fishing at a nearby lake, and caught a bunch of rockfish. The coals were hot on the grill, and it was a free-for-all, with plenty of beer and wine to go around. We all hung out in the space of about three dorms, on picnic benches and chairs, under a canopy of bright stars, with filet after filet served up endlessly from the grille.

I’d do one, then hand the Alvarez over to him and he would do one. If one knew the others’ song, we would sing along. Mike was a huge hit. He selected songs that were familiar to most of the folks there, they were singing along, clapping, and generally having just a great time. He was a very complementary and gracious fellow. With an easy smile and likable manner, he did not seem to need the abundant applause and admiration he got from the listeners. Mike was just doing what came naturally and what he enjoyed.

Playing music at this point was only a temporary interlude for Mike, his time was centered on his buddy, Hero.

We met up a few more times at subsequent meets at Colonial. Great singing, playing and jamming times.

He was excited when he bought his Martin guitar, and of course it was nice to be able to not have to share one guitar but to actually play together.

Mike often spoke of his kids and his wife Lisa, whom he first met at a horsemans’ picnic at Foxboro Raceway in 1993. Being a racing official herself, she has supported his endeavors, both musical and equine, all the way, one hundred percent.

I would go up and race the Meadowlands, and I could see Hero in the program, winning the top classes, no easy feat in those days to race at that level at that particular track. He was amassing big earnings, that maybe could have been ours? A question never to be answered. I pride myself on my care and knowledge of horses, but Mike comes from a racing family and had as much as I did or more. Only recently I have heard of his father “Snuffy”” a savvy trainer.

Mike retired Hero, when he still could have raced him at a lower level, and continued to make money.

Enter the age of the Internet, cell phones, …social media! It was easier for everyone to keep up with friends and family. I was so pleased to see that they still had Hero’s Cavalcade, and he relaxes in luxury settings with another equine buddy Rastus on their New England farm. I think folks who malign racing would be surprised to know how many trainers and owners provide homes for their horses when the racing days are over.

Mike made a comeback to racing competition. After making sure he could still win a race, he once again retired to the farm. I would see his multiple posts and was amazed at the variety of genres that he likes. From Jazz to Country to rock ‘n’ roll. He never seemed to limit himself.

Mike writes songs. Lots of them. I’ve only heard a couple.

Like it always is with Mike, he leaves us all wanting more.

Mike amazingly has survived multiple health crisis, including liver and kidney failure. While in the hospital, he wrote a super bunch of songs, he videotaped himself doing theee of them, Lisa had me upload these two:

The first is entitled frankly: “My Advice to You“

The second we have is a song written to and for his wife Lisa. “You Gotta Know”

As I write this, Michael Pratt is struggling for his life from some strange infection which has spread over his body and into his blood. He is way too young to go, and we are all hoping that the inevitable which comes for all of us will not visit him yet. I hope that I will be able to update this blog by writing and tell you that he has pulled through once again, to sing for us and play his guitars.

I’m so glad we never claimed that little Black horse.

“Good news to share: After 51+Days, Mike is home! Kidney is functional again and blood is normal. The Drs have no explanation as to the cause of this nightmare. In true “Mike” fashion he said, “I should be good to paddock in a few weeks” Let’s hope!! I want to thank everyone for the outpouring of love and support. I truly believe all the positive energy helped him heal.”

[1] Most harness horses in America wear an overcheck bit which supports the head during the race. Before going out for the post parade, as the driver gets on the seat, that is when the overcheck strap is attached to a hook on top of the harness. Thus “Checking up”
[2] An owner is a person who pays a professional racehorse trainer to train their horse. They may also have training and driving capabilities.
[3] Meaning: to start quickly in a race with the ability to get “on top”, or to lead the race
[4] Meaning: last quarter a few fifths over 26 seconds. In 2000 that was top-flight speed
[6] Hind-end uneven gait: from lameness, a neurological problem or shoeing imbalance.
[7] We patched the Pine Chip trotter up to win a race in a respectable 1:57 at Colonial Downs, then sent him to the owner to fool with up near his home in Jersey. He eventually ended up back with the Amishman who used him to breed. I wonder if any of his offspring are around?

This site uses Akismet to reduce spam. Learn how your comment data is processed.